O.K., I’m not going to lie – I’d much rather still be in Spain than here blogging about Arizona workers compensation.  As many of you know, I lived in Spain from 1990 to 1992 as a missionary for the LDS Church.  I’ve returned for vacations several times since and it’s amazing how the country has changed.

This time, we enjoyed a Real Madrid soccer game at the Bernabeu Stadium, one of the coolest things I’ve ever done.  We sat second row, I’ve got great pics of the players.  We also saw Los Miserables, Les Mis in Spanish.  We saw two flamenco shows, a bullfight, and all the sights of Sevilla and Madrid, two of the most beautiful cities in the world.  We rode Spain’s high speed train, the AVE, twice at speeds up to 200 miles per hour.  Would be nice if we had something like that here in Arizona. 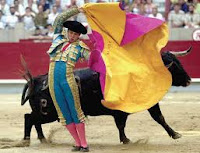 Now I’m back.  Joe Arpaio is still corrupt and hopefully a little closer to being indicted.  Our recall group of Russell Pearce, Citizens for a Better Arizona, has collected even more signatures and will be dropping them off at the Secretary of State’s office next week (more on that in a later post).  And I’ve got a pile of work on my desk.  I’ll be back to blogging daily on various Arizona Workmans Comp topics.