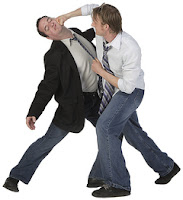 Some of our most interesting cases have been those where the injuries were the results of fights or assaults at work.  The general rule of whether or not these injuries are compensable is whether or not the subject matter of the fight was related to the work or was personal.  This rule applies equally to both the aggressor and the victim of the assault.

For example, I recently litigated a case where my client had been arguing all day with a co-worker about the co-worker’s sloppy work that was keeping them from finishing a job on time.  The co-worker started cursing at my client, who shoved the co-worker, who then punched my client, knocking him over and fracturing his ankle as he tried to maintain his balance.  Because the subject nature of the argument was related to the work, the claim was found compensable.  On the other hand, if the two had been fighting over a personal matter, such as a girlfriend, the injury would not be considered as arising out of the employment.

These cases are usually very awkward to litigate because many times the people who have fought are in the courtroom together and sometimes they describe the altercation in very colorful language.  Hearing Kathy Hansen interpret the words “te voy a reventar el osico” and “revamientemelo pues, vieja puta” is one of the highlights of my career!

Chad T. Snow is an attorney who handles exclusively workers compensation matters before the Industrial Commission of Arizona.  he can be reached at Snow, Carpio, and Weekley in Phoenix at (602) 532-0700 and in Tucson at (520) 647-9000.